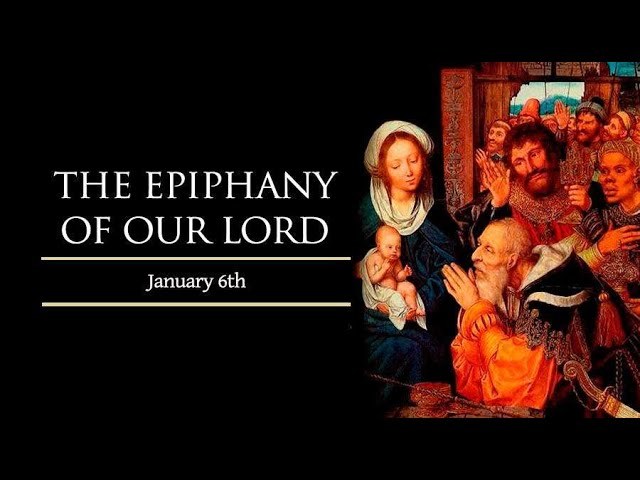 Today we celebrate the revealing of God in Jesus, particularly to the Gentiles…that is, to the whole world. Our readings this day are about light, about revealing, about that which has been hidden being now made plain. Epiphany of course means appearing or manifestation of God. We mark the ending of Christmastide and the beginning of Epiphany today: a season that is about the continuing revelation of God in Jesus.

It is here that, finally, the Magi from the East arrive to visit and bring gifts to the long-foretold King of the Jews. And it's important that these figures don't get lost in our nativity sets or in the shuffle of the Christmas story.

Matthew intentionally places the arrival of the Magi sometime after Jesus' birth, not inhabiting the same time as the shepherd's visit in Luke. They are following a star or some astrological sign, as non-Jewish, non-Hebrew people to pay homage to this new King, a King that has somehow been revealed to them in their own places and cultures.

There has been much speculation and interpretation surrounding the identities of these visitors. Holy Scripture gives us little to go on, other than using the same word "magi" applied later in more pejorative ways to magicians and sorcerers. They've been called Kings, including in our closing hymn We Three Kings, but we don't know if they really were in fact royalty. We also don't know if there were three. At least two! Probably at least three, maybe more.

Some have stated with more certainty that these were astrologers, probably of Persian/Babylonian origin. Some go further to say that they were of the Zoroastrian faith (a Persian, monotheistic faith), perhaps even priests. Tradition has also ascribed names to them: Caspar or Gaspar, Melchior, and Balthazar, representing the regions of India, Persia, and Ethiopia respectively. Essentially, there has been an emphasis on these Magi representing the Gentiles...the nations who would gather to the light of God, representing other places of the known world at the time.

For us today, Epiphany is a day where we remember that God is always at work in the world, revealing God's self in unique and perhaps unknown ways to those who are also seeking God. I find it interesting and significant that it is the visit of these Magi which causes the religious establishment to revisit their own religious texts and traditions concerning the Messiah. It reminds me of one of the oft-quoted sayings from the late Rev. William Sparrow, a professor at VTS, "Seek the Truth, Come whence it May, Cost what is will." Epiphany reminds us that God comes to us in unexpected and various means, often surprising us.

This challenge to seek truth resounds with renewed force for us today, and not just because it is Epiphany. Today in our nation we are also marking a year since radicalized domestic terrorists stormed the Capitol in a riot or insurrection or whichever word you choose. These acts lead to destruction and death, a demanding for the hanging of our then Vice President, and the spouting of vitriol and hatred. Many who forced their way on to the floor of the Senate claimed to follow the same Jesus I do, and prayed a prayer that continues to chill me to my core, invoking the name of Jesus praying for the "white light" of God's love, protection, peace, and harmony.

But of course, this is not the the way of the kingdom. This is not what it looks like to follow Jesus. This is the way of Herod. It is the way of claiming a desire to worship the King Jesus while clinging to power and plotting the murder of the innocent out of fear of losing that power. It is a vision of a kingdom that is not about the inclusion of all people from all nations but of the exclusion of those who do not fit a predetermined mold or ideology. It is a vision of a kingdom built on falsities and conspiracy theories, instead of truth and wisdom.

Whether it was a year ago during the insurrection or two thousand years ago during the murderous reign of Herod, the same evil spirits of fear, exclusion, and murder are at work in this world. January 6th is a reminder of this, as well...a different sort of revealing or manifestation of antichrist spirits and forces in the world. This is the way of Herod. This is not the way of wisdom as we see in the journey of the Magi. This is not the way of Christ and his kingdom.

Instead, we see in the Magi those who are paying attention to God's work in the world, those who seek the work of God in places far beyond their own knowledge and comfort, who take great risk and undertake great cost to seek out where God may be. They seek wisdom and pursue it, even though they come from different backgrounds and potentially even different cultures.

If ever there was a need for the church's prophetic witness as a varied, diverse, and wisdom-seeking people, it is now. As we read in Ephesians, by design, God has and is revealing God's self to all people and through all people. All people, not the ones we happen to agree with, or the ones who look like us. Paul's own ministry was to bring the good news of Jesus Christ to all people, "to make everyone see what is the plan of the mystery hidden for ages in God who created all things so that through the church the wisdom of God in its rich variety might now be made know to the rulers and authorities..."

When we see the journey of these Magi, we have the opportunity to see a representation of all those who seek God. We see ourselves, yes, but we also see our neighbor, we see the recent refugee or immigrant who is also seeking God and light and peace, we see our spiritual but not religious neighbor who is seeking God in ways that make sense to her though perhaps not to us, we see those who have walked away from the church and established religion because they, too, are seeking God and are having a hard time finding God in the church. We see those who resist the ways of power and kneel before Jesus rather than Herod.

As with the Magi, so also today, we have the warning and invitation to carry on in a different way than we've come. This is how it is when we encounter God, when we experience the joy of revelation, when we encounter the light of Christ in the world: we see things differently than we have before and it prompts us to carry on as changed people.

That is what Epiphany, and the season which follows, is about: Light has come into the world, God is revealed in Jesus. Lift up your eyes and look around and follow a newly revealed path of faithfulness, alongside an increasingly diverse and varied group of fellow travelers who are all seeking God together.

Subscribe to receive email updates with the latest news.